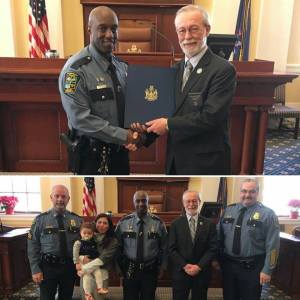 AUGUSTA- On Tuesday, January 17, 2017, Officer Tim Williams of the Skowhegan Police Department was presented a Legislative Sentiment by Sen. Rodney Whittemore, District 3, for his heroic rescue of a young woman and her son in December. Officer Williams was accompanied to the State House by Sargent Joel Cummings, Chief Don Bolduc, Fiancé Kate Mantor and Daughter Alayna Williams.

Following the reading of the Legislative Sentiment presented to Officer Williams, Sen. Whittemore said, “I am pleased to welcome Officer Tim Williams of Skowhegan to the Senate today to formally honor him for the true acts of bravery he displayed in December when he stormed into a burning home in order to rescue a young woman and her 4-year-old son.

While Officer Williams says he was just doing his job, the reality is that he is a true hero who is dedicated to serving the Skowhegan community, selflessly.”