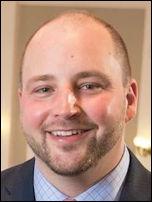 Senator Matt Pouliot is serving his second term in the Maine State Senate and is currently the Assistant Republican Leader. He represents the people of Senate District 15, which consists of Augusta, China, Oakland, Sidney and Vassalboro.

Senator Pouliot currently serves on the Taxation Committee and previously served on the Education and Cultural Affairs Committee.

Prior to his service in the Senate, Pouliot served the residents of District 86 in the Maine State House of Representatives for three terms. While in the House, he served on the Taxation Committee, the Elections Committee, the Education and Cultural Affairs Committee and the Redistricting Committee.

An Augusta native, Matt graduated from Cony High School in 2005 and went on to earn a Bachelor of Science in Business Administration from the University of Maine at Augusta in 2009 and is a graduate of Leadership Maine. Matt makes his living as a Realtor and is the owner of Pouliot Real Estate.

Matt has made his home in Augusta with his wife, Heather and their dog, Oliver. When not working, he enjoys a multitude of outdoor activities, traveling and flying airplanes.

With so much money heading toward local governments, now is the time for property tax relief

Senator Matt Pouliot presents this week’s Senate Republican radio address.. Hello, I am Senator Matt Pouliot of Augusta. With increased revenue sharing from the state and hundreds of millions of dollars in federal money heading into Maine in the form of the American Rescue Plan, towns and cities have an unusual opportunity to deliver real … END_OF_DOCUMENT_TOKEN_TO_BE_REPLACED

This week’s radio address is presented by Assistant Senate Republican Leader Matt Pouliot. Hello! I am Senator Matt Pouliot of Augusta and I represent Senate District 15. As the most unusual session of the Legislature in many years comes to a close, Republicans in the Maine State Senate have a lot to reflect on. While … END_OF_DOCUMENT_TOKEN_TO_BE_REPLACED

Sen. Matt Pouliot explains why Governor Mills misses the mark with her plan to pay people who haven’t been working $1,500 to go back to work. It’s time to end the $300 a week in bonus unemployment benefits now.