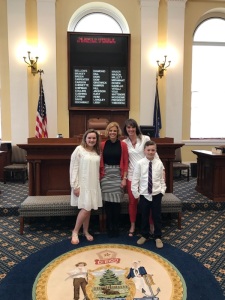 AUGUSTA – On Thursday, April 27, Kate Simson of Scarborough visited the State House with her children, Sayre Norfleet and Wyatt Norfleet. During the visit they met with their state senator, Amy Volk (R-Cumberland), and Sayre and Wyatt served as honorary pages in the Maine Senate.

“It was great to see some familiar faces from home in Augusta,” said Sen. Volk. “I hope the kids learned a lot about our state government and enjoyed their time at the State House.”