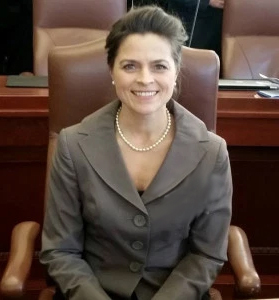 Senator Lisa Keim was first elected on November 8, 2016 to serve the constituents of District 18 in the Maine State Senate.

Senator Keim currently serves as the Minority Senate Lead on the Joint Standing Committee on Judiciary and as a member of the Government Oversight Committee. Previously, she also served as a member of the State and Local Government Committee. She has also served as Chair of the Working Group to Improve the Provision of Indigent Legal Services, the Right to Know Advisory Commission and the Criminal Records Review Advisory Committee.

Outside of state government, Senator Keim serves as Co-Chair of the national Future of Work Task Force for the Council of State Governments (CSG), on the New England Board of Higher Education’s (NEBHE) Legislative Advisory Committee, and as State Director for Women in Government.

A Harvard Kennedy School Senior Executive SLG Fellow, Senator Keim holds a B.S. in Leadership and Marketing from the University of Southern Maine and is a graduate of the 2017 Eastern Leadership Academy and a Henry Toll Fellow.  Lisa is a lifelong resident of western Maine, a wife of 28 years to her husband Blue, and a proud mother of three children that she homeschooled until high school.

Together, her family enjoys hiking, skiing, riding bicycles, and ATVing.