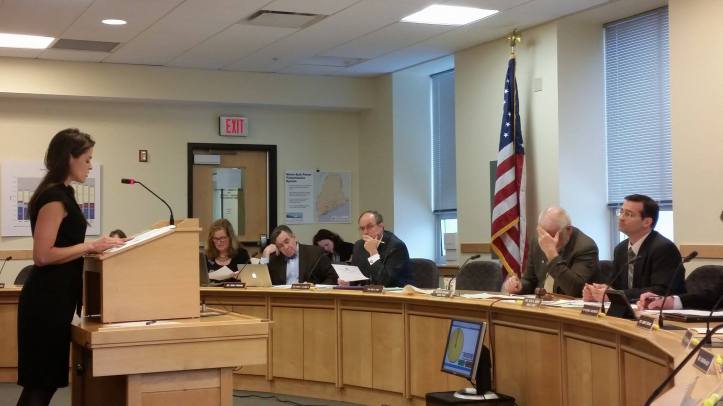 AUGUSTA –  On Wednesday, March 1, state Senator Lisa Keim (R-Oxford) presented Legislative Document 90, “An Act To Amend the Charter of the Rumford Water District,” to the Energy, Utilities and Technology Committee, surrounded by Rumford residents who traveled to Augusta to weigh in on the issue.

If passed, LD 90 would revise Rumford’s Water Charter to give the citizens of Rumford a vote on the matter of commercial extraction of water for resale. The bill also includes language to require a minimum participation in the vote.

In attendance were nearly two dozen Rumford residents to speak in favor of the legislation, including Len Greaney, a former town manager for Rumford. In his testimony he said that he was there “…representing 1,085 Rumford voters who signed petitions supporting Senator Keim’s legislation.” He said that LD 1482, passed by the Legislature last session, “Broke the TRUST between the Rumford voters and the Water District.”

Greaney went on to say that “Our local experience since the approval of the RWD [Rumford Water District] charter has been dramatic; creating significant anguish and trust concerns expressed by a large majority of our voters.”

Todd Papianou, another resident of Rumford, said “I’m standing here in Augusta today because LD90 is important to all of the voters in our town and this state. I’ve never had a political lawn sign in my life until now. No other issue has seemed this clear to me…”

Joesph Martin of Rumford, like several other Rumford residents, sent his testimony in electronically. He said, “The way the Rumford Water District is set up it takes voting rights directly away from the taxpayers in the town regarding their public utility entering into commercial contracts. The 3 person board is not elected by the people. It is appointed by the selectmen. [This charter change that allows three] people to enter into an agreement with any commercial water company or corporation, without a direct vote by the people, gives to much power to the three people that are appointed.”

John and Jessica Goff, also of Rumford, testified that, “We oppose that the board of trustees of the Rumford Water District which is made up of three people will be deciding the fate of the town water…There are questions that town members have asked that have not been properly addressed during meetings.”

Senator Keim told the committee, “While water extraction for the purpose of resale is a hotly contested issue in my district and around our state, I am not here to speak in support of, or in opposition to, this or any proposed Nestle contract. This bill is simply about giving the voters of the town a chance to weigh in on all proposed commercial contracts for water resale… I am asking the committee to consider passage of this bill that would shift the right to contract commercial extraction of water for resale purposes from those few hands into the hands of many concerned and involved citizens….I believe a vote will actually serve to benefit all parties involved.”

LD 90 has been scheduled for a work session before the Energy, Utilities and Technology Committee next Wednesday, March 8 at 10:00 a.m. in Room 211 of the Cross Building in Augusta.