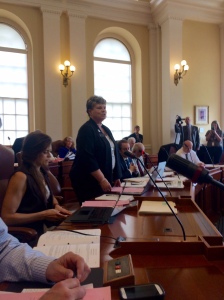 AUGUSTA – Senator Joyce Maker (R-Washington) today presented a Joint Order, S.P. 573, before the Maine Senate to preserve funding for the Downeast Correctional Facility for the next two years. The order, which received broad support from both parties, passed on a 30-3 vote.

The order recognizes the current bed shortage in the state correctional system and as such directs the Committee on Appropriations and Financial Affairs to, “…report out, to the Senate, a bill that provides funding for the operation of the Downeast Correctional Facility for fiscal years 2017-18 and 2018-19.”

“I am touched that so many senators would not only support this measure, but stand to speak in favor of its passage,” said Sen. Maker. “Once the Governor began releasing prisoners into communities around the state before their time was served, this Washington County problem became a statewide problem.

“The Downeast Correctional Facility needs to be preserved, at least until additional beds are brought online elsewhere and the previously agreed upon pre-release center to be built in Washington County comes to fruition. Our County depends on it, our safety depends on it and our justice system depends on it.

“Who are these prisoners we are releasing? What were they incarcerated for? Have the victims been notified? Why is this all happening behind closed doors and with an utter lack of transparency? We all have a right to know what is going on in our state. I’ve heard of one prisoner serving a two-year sentence who is now being released after serving only 30 days of the sentence. How is this fair to the victims? Do we not care about their rights?

“I will continue to fight for the people of Washington County for as long as I’m here in Augusta and to stand up for what I know is right.”

The Joint Order will now go to the House and is expected to be taken up by the House tomorrow.